David Crockett Steam Fire Company No. 1
The first wagon train had just departed St. Louis for California. Twenty-six states comprised the United States. New Orleans was the state capital of Louisiana. The ninth President of the United States died shortly after taking office and was succeeded by Vice President John Tyler. The year was 1841.

In July of that year, the David Crockett Steam Fire Company No. 1 got its start when twenty-seven men of the village of Mechanickham organized to protect their families and homes from the ravages of fire. The organization then known as the Gretna Fire Company operated as a bucket brigade for its initial three years until, in 1844, the year of its incorporation, a hand pumper was purchased, which drew water from wells dug in the streets and back yard cisterns.

About ten years later they built their first fire station close to the river. At that time there were no levees to the river, so they kept getting flooded. The levees were going to be built, so they moved their fire station to where it is now at 205 Lafayette Street. That now historic site is home to one of the nation’s few firefighting museums. 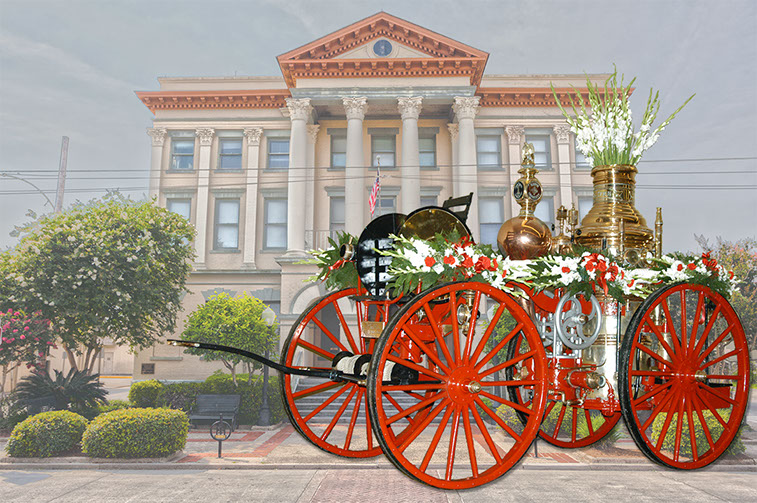 It was not until 1874 that the company changed its name to David Crockett Steam Fire Company No. 1. The new name represented a two-fold change. First, it reflected a new generation in firefighting equipment as steam fire engines had then been in successful operation for twenty years. Only two years after the name change a steam-driven fire engine was purchased. Affectionately referred to as “the old steamer,” it now serves as a focal point of the fire museum.

The second change in the name was to name the company after the legendary hero of the Alamo.

Davy Crockett was the leader of a proud band of Tennessee volunteers who joined General Andrew Jackson against the Creek Indians following a massacre by Creeks in Alabama. Some of the Creeks fled Alabama for the safe harbor of the Spanish province of Florida, the Jackson/Crockett forces continued their pursuit, invaded Florida, and despite military opposition of Spanish and British troops were victorious. Although a hero as a leader in battle and a leader in our nation’s government having served three terms as a congressman, he is best remembered as he and his courageous volunteers ignoring tremendous odds joined others at the Alamo to fight for the independence of the people of Texas. These men gave their all to fight for their principles and preserve the liberties of others. It is interesting to note that the Battle of the Alamo occurred in 1836 which coincidentally was the year in which the Village of Mechanickham (now the City of Gretna) was founded.

A hero not just for what he did, although that in itself reached heroic proportions, but for how he accomplished what he did. His deeds were done on a volunteer basis and not just to assist his immediate neighbors, but along with others like him to assist and protect those he would never know. These men would leave the comfort of their homes, give of their time and energies, and, in fact, risk their safety and lives. The company still uses the motto it adopted from Davy Crockett, “Be Sure You’re Right; Then go Ahead.”

The Crockett Company however, was not the only one to organize during the early years of Gretna’s development. Other companies included the William Tell Fire Company, Gould Fire Company No. 2, Mechanics Hook and Ladder Company, and the Good Intent Fire Company No. 1.

Although much time and history have passed, some things have not changed. Quoting from a history of the company, “Unfortunately, after acquiring the steamer, the company could not afford to purchase and care for a horse to pull it. Consequently, the firemen had to pull the pumper by hand to the scene of the fire.” Quoting further from the history, “Occasionally, a town baker, whose bakery was located across the street from the fire hall, would allow his horse to pull the pumper to the fire.”

In 1983, the original Crockett fire house at 205 Lafayette Street, and the 1876 steam pumper, were placed on the National Register of Historic Places.

David Crockett Fire Company was known for their parades. They would pull the old steamer down the streets of Gretna. Members would be dressed in their formal uniform consisting of a long-sleeve red wool shirt with pearl buttons, a wide white belt, and a white old-time fire helmet. The uniform is still used today for parades and members’ funerals.

The other thing that has not changed is the human aspect of the members of the David Crockett Fire Company. As with the original bucket brigade, the members of today still join together to protect their families and homes from the ravages of fires. And as with the Tennessee volunteers they leave the comfort of their homes, give of their time and energies, and, in fact, risk their safety and lives. Yes, unfortunately the risk is still there. With modern firefighting equipment and methods, firemen can get closer to a fire and contain it more quickly; however, the human risk of the fire itself, its heat and its smoke, are there as they were in 1841. For these reasons it is not sufficient to give recognition to only the founders and early members whose efforts should not go unnoticed, but recognition must also go to all who have succeeded them in having the Crockett Company bear the unique distinction of being the Oldest Continuously Active Volunteer Fire Company in the U. S. A.